Fuses and circuit breakers will stop the electricity in a wire when the load is excessive or there is a short circuit. They prevent overheating of wires from too much electricity trying to flow through a wire that is not large enough to handle it.

Ground fault interrupters (GFI or GFCI) were a major advancement in electrical protection. These devices detect any imbalance in electrical flow, such as when electricity goes down one wire, but rather than coming back the other wire, goes off somewhere else, like through a human. They are so good at preventing shocks that they are now required in all high moisture areas, like outdoors and in bathrooms. 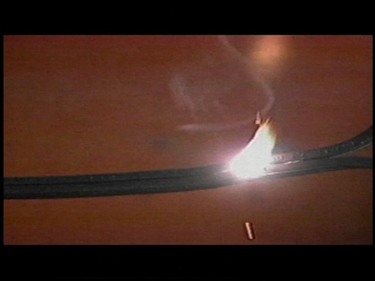 But there has been one other electrical problem that there was no device to protect against until now -- ARC FAULT.

An arc fault is a little spark between two wires caused by scraped insulation, by a staple too tight to the wire, by a nail just barely striking a wire when you hang a picture on the wall, or any other sparking that does not cause a short circuit. If the spark is major, the circuit breaker will sense an overload and cut the current. But a large number of house fires are started by small sparks that can start a simmering fire, and until now there was no device to detect these arc faults.

The only way to detect this problem is to have a small computer chip continuously studying the nature of the electrical current. Sparks give off an electrical "signature", and after a lot of research and development, the electrical companies have managed to design a device that can detect this problem and that can be made in a small enough package to fit into your mains box in the place of a regular circuit breaker. 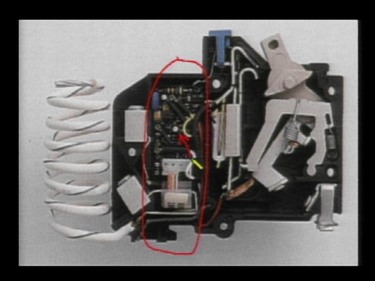 It works, but the problem is that it is expensive. A regular circuit breaker could cost $7-$8 whereas presently an arc fault detector will cost over $50. So the code bodies agreed to help the development of this essential safety device by requiring the use of a minimum number of arc fault detectors in new housing as of 2002. That should get the production volume up, and the cost down.

Arc Fault protection has grown with quite a debate.  Is it worth the cost?  It apparently does cause problems with some electrical systems.  Despite this, code requirements have grown and in 2015 significant new requirements have appeared in both the US and Canada.  But because of the controversy, the code provesions are complicated and actual enforcement is up to local code authorities.  Check with your local electrician as to what are the currently enforced requirements in your area.

Anyone with aluminum wiring should consider a conversion to Arc Fault Interrupters immediately as this technology will catch some of the aluminum problems, particularly those caused by loose screws. It will not stop an improperly sized or installed twist connector from heating up, but once the wires start to spark, it will break the power to the problem. Follow this link for more on aluminum wiring.