Measuring magnetic fields inside your house 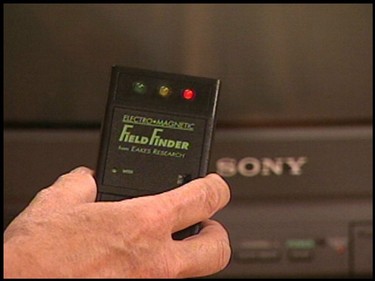 All electrical currents give off electromagnetic radiation when there is any change in the current flow, which means that our standard AC current is giving it off all the time. (DC current only creates an electromagnetic field when it goes on or off or changes magnitude.) Transformers tend to give off more radiation than most wires. That's because transformers are lots of wires wound tightly together and electromagnetic radiation is precisely how they modify voltage and current flow. We have transformers all around us: Large powerful ones are on the power poles outside our houses, smaller ones are in our microwave ovens, most of our florescent light fixtures, halogen light fixtures, radios, TV's, computers, stereos -- and our cell phones work by sending out radiation as well. The closer we are to the source of the radiation, the stronger the radiation -- its power drops off very quickly as you move away from it. The other thing about radiation is that is goes through just about everything, passing easily through all your home's walls and the walls of most unshielded appliances.

Those are the scientific facts. For the latest details on the controversy about how all of this effects our health, follow this link to the debate.

So science says that yes there are some problems with extreme doses of radiation, and the holistic movement says that there are problems with much lighter doses. I am certainly not qualified to take an expert position on this debate. What I do know is that these invisible radiation bands that we cannot feel or hear can be measured with a device called a Gauss meter. However, most Gauss meters are fancy and complicated instruments and you need special education to understand what they indicate.

A whole profession has grown up around hypersensitivities related to electricity, or electrosensitivities. These people have the technical instruments to measure a wide range of electric and magnetic fields, interpret the results for you and in many cases even prescribe solutions or even direct electricians that may need to make corrections to your house wiring. I have not developed an exhaustive list of reliable people in this field but a good place to start is www.em3e.com for the Montreal area and www.buildingbiology.ca/wd for the Vancouver area .

On a much less sophisticated level, an electronic engineer working for a company called, oddly enough, Eakes Research (yes they apparently are distant relatives) created a simplified Gauss meter based on some standards that were proposed in Sweden but never passed into law for lack of medical proof that they really represented danger levels. The device will give you a green light if the radiation levels are really low, a yellow light where radiation strength is beginning to show up, and a red light where the levels exceed these proposed guidelines. Without trying to settle all the debates, it does allow those who want to know to determine where there are electromagnetic radiation fields in their own house and just how strong they are. This is not to make people panic. But as I have used this gadget for several years now, it does allow one to discover where the outdoor hydro transformers are too close to a bedroom, to discover that the back sides of many computers and TV's, particularly older ones, radiate several feet out the backside, perhaps reaching the pillow area of the bed on the other side of the wall or the co-worker on the other side of the partition. You'll discover that many appliances have their transformers on all the time (because it is cheaper to design an appliance with a switch after the transformer rather than before the transformer). So that microwave oven may be transmitting a lot of electromagnetic radiation all the time even though it is fully protected against leaking microwave radiation. One of the shocking discoveries was that my favorite clock radio needed to be pushed out of arms reach of my pillow to stop radiation from coming at me while I sleep, and some baby watcher wireless transmitters are giving off a fair amount of radiation right next to the baby's head. Of course, according to official medical authorities, none of this is a health risk, except perhaps that hydro transformer. But at least with this gadget you can finally detect radiation, and arrange your house accordingly, if you so choose.

But please remember, meters like this are very generalized meters and only serve to give you an order of magnitude of electromagnetic presence in your house and a bit about where they are strongest.  They are only a starting point and not a substitute for a thorough analysis by a professional that can pinpoint specific types of radiation and propose specific remedies.

The Eakes Field Finder no longer exists, but if you are interested in being able to measure at least in a general way, you can still find some generalized low costs meters, particularly at Essentia.ca (with a terrible web site but give them a call in Ottawa).  The 3e Store in Quebec is also a reliable source for meters focused to residential housing radiation problems.

While we are talking about electromagnetic radiation I must direct you to a fantastic new invention for in-floor heating: an electric heating cable that gives off no radiation! Check it out.