Earnie from Vancouver wants to know how can you predict the failure of your hot water tank before it fails.

That is not an easy one Earnie. There are many signs that will indicate that you need to change the tank or at least do some maintenance work to keep it running, whether it is an electric or gas tank. 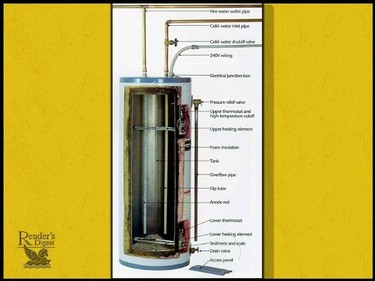 If it doesn't seem to furnish as much hot water as it used to, it could be filling up with sediment as you can see in the photo. Drain some water out of the tank until it runs clear and that may get it working correctly again.  You could get fooled by this as I have seen tanks that were obviously clogged and only flushed out with city water pressure, simple draining wasn't good enough.  They would spew out sediment for a couple of minutes then run crystal clear, but still didn't provide much hot water.  When I split one of these tanks in half to see what has going on inside, I discovered it over half full of sediment, with a clear snake like river running through the sediment to the drain valve.  It had only cleared a path through the junk, didn't remove the junk.

Years ago manufacturers recommended that you flush the tank for sediment once a year to get rid of any loose stuff in the bottom of the tank before it solidifies into an un-moving mat.  Hardly anyone ever does that.  With the latest tank that I purchased, the manufacturer recommended flushing sediment twice a year!  OK, if we really need to keep the bottom of the tank clean to avoid corrosion under  all that sediment -- how do we do that?

Connect a garden hose to the hose bib on the bottom of any tank and run the hose to a floor drain or if necessary to a sink or toilet.  Have someone with gloves on (this hose gets hot) hold it in place, you don't want it squirting hot water all over the place.  Then open the hose bib just a little at first then enough to have a good flow.  YES, this is done with the tank fully functional, just like you were running a hot water tap in the house -- but now you are drawing the water off of the bottom of the tank -- the faucet gets its water from the top of the tank.  (WARNING: If you want to drain the tank, turn off the circuit breaker to the heater, and if it is gas or oil, close the fuel valve -- you do not want any hot water tank heating up while it is empty.)

Have the water flow until it runs clear.  With a regularly flushed tank that will only take a minute or two.  Turn off the valve, and let the water in the hose cool down before unhooking it.  If you have a large collar plastic valve on the bottom of your tank, follow this link for details on how it works.

There are some cases where lack of hot water is caused by a failed dip tube, often accompanied by little white beads coming out of the hot water faucet. Look up the keyword Hot Water Tank and locate the entry about "degenerating dip tubes" for details on this problem.

You can also turn off the water, turn off the power or gas, drain out a few litres of water out of the tank and then unscrew the Anode rod (check the photo). This rod will slowly disappear if you have water that could possibly corrode the tank itself, it is a sacrificial rod that attracts the corroding materials to itself to protect the tank. If this rod has been reduced from its original 3/4 of an inch diameter to less than 1/2 of an inch, it needs to be replaced. If it is totally gone, your tank is probably in the process of corroding.

But the critical question: when will the tank start to leak? No good answer because it is all dependent upon the water conditions, the water temperature and the amount of water that you run through the tank.

A tank is supposed to last for about 10 years, but many are known to be in great shape 25 and 30 years later. That can give us a false sense of security. All of this may not be critical if the tank is located in an unfinished part of the basement with a good basement drain near-by. But if the tank is located in a finished part of the house, especially if there is a finished ceiling below the tank, you may need more protection. 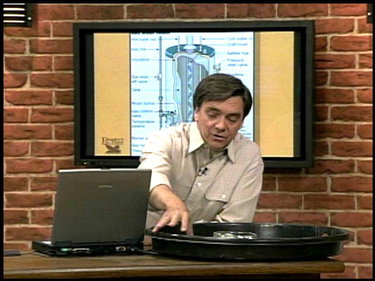 You can get catch basins made to put under water tanks. They even have provision for connecting a drain hose that could go to the drain, diverting any damaging water then the tank does start to leak. 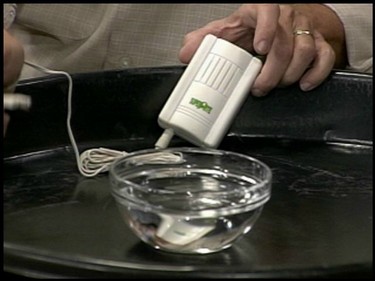 You can also get flood alarms that will sound off if they get wet. A battery operated alarm may not be that useful as most people would forget to change the battery. You can actually get hard wired flood detectors as part of your whole house alarm system, which means that the central alarm office may actually call you at the office to let you know that you have a plumbing leak in your house.

The safest route would be to replace your hot water tank when its warranty runs out even though the tank should be good for much longer than that. It might be a good idea to write that date right on the side of the tank when it is installed.

For bad odours, especially on well water that is not chlorinated, check out Two Water Problems.

But now the insurance companies are beginning to change the game, since their single largest homeowner loss comes from water damage; some from the roof, some from flooding and some from plumbing.  Hence many insurance companies are now requiring you to replace your hot water tank every 10 years, even if you buy a super stainless steel tank good for 25 years!  In fact, this move is so strong that many tank manufacturers are no longer making any tanks that are designed to last more than 10 years.  This is worse than planned obsolescence, it is forced obsolescence.