Plunging a Clogged Sink: It's the UP stroke that counts!

If your sink is just suffering from a lot of face cream and shaving cream, the least expensive and most ecological solution is simply 1/2 cup of baking soda (try using a funnel to get it into the drain), followed immediately by a cup of vinegar.  Let it sit a few minutes as the foam subsides or until it lets go and the water flows, then flush with hot water.  Let it sit a few minutes and flush with cold water.  For greasy type of blockages this works really well. (Thanks to my sister Sharon who sent it on from Mary Hund of Everyday Cheapskate.)

Plunging a Clogged Sink: Its the UP stroke that counts!

But if it is hair or some object that is blocking things, the vinegar can clean around the hair and maybe unblock things but usually hair has to be pulled back out the way it went in.  The traditional instrument is the sink plunger. 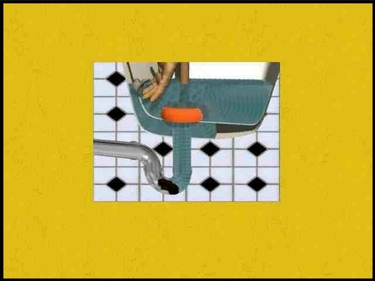 A sink plunger works best when you plug up the overflow to keep the pressure in the right place, push gently down on the plunger and then pull it up with energy. Forcing down may just lock the blockage in tighter. Pulling the block back toward the sink will undo it from the same direction it was created.  See the video on the bottom of the page. 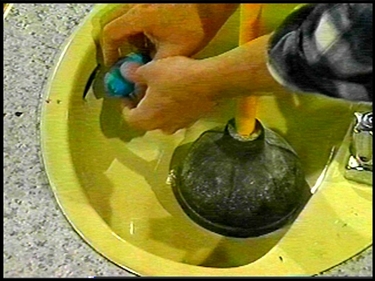 Although a skirted toilet plunger can do a lot of good, in many toilets the same thing applies as in the sink -- you have to block off the little holes around the rim as in the photo.  You can use putty, even vegetable bags, but don't loose anything down these holes, as it is very hard to get it back out.  And remember, it is the upstroke that counts.

Fishing for the problem 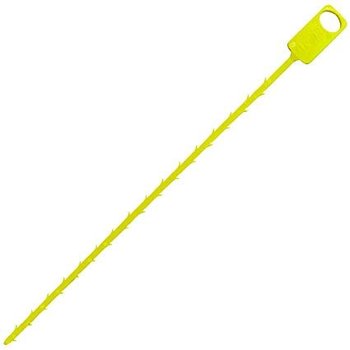 There exist flexible plastic shafts with sharp barbs on the edges that work pretty well in grabbing hair.  Zip-It is just one.  They all say for one use only, probably because it has been places you don't want to visit again. But if you clean it well being careful to not get caught on the barbs, it works for a long time.  Zip-It is the one in the photo. 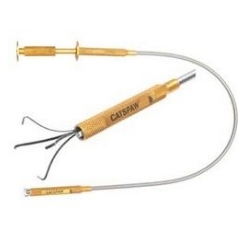 One interesting gadget for getting hair or even objects (like that wedding ring) out of a drain is a mechanics flexible pickup - a long flexible shaft with a "claw" that pops out the end to grab the object.

How about those pressure gadgets?

You will find many gadgets in the stores designed to push blockages on down the drain; from cans of compressed air, to air plungers, to attachments to a garden hose.  Don't ever use any of these!  The drainage piping was never designed to withstand pressure and you could blow the drain pipe right apart at the joints inside the walls.  Even if you don't blow open the pipes, these gadgets often force waste up into the vent stack, the path of least resistance -- and now your drain will not work correctly until you cut open the walls and replace those vent pipes. 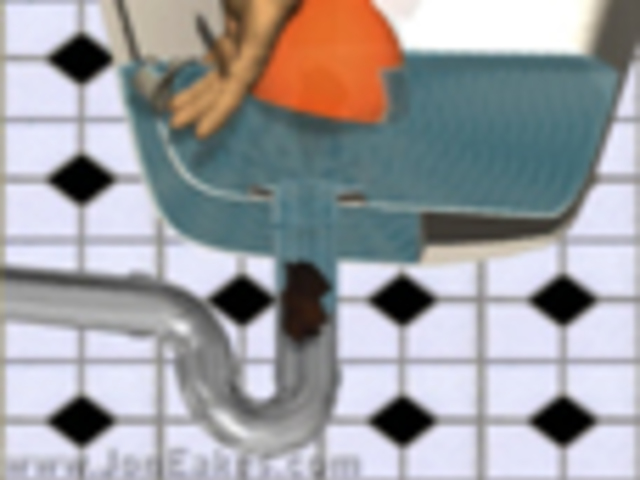