The plumber left a cap on the vent stack and it smells bad in the new house. 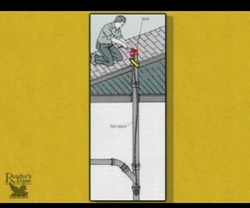 Ron from Guelph, Ontario writes: "My wife and I moved into a newly built home in June 2001. There is an orange plastic cap on top of our vent stack. The builder says that the plumber needed this cap on so he can pressure-check the system, but that it is to be removed following the test. He said that it would not affect our house in the meantime. It has been three months and our house now seems to be developing a sewer-like smell lately. Is this being caused by the plugged vent stack?"

Yes. The orange plastic cap is probably the most common way to smoke test all the joints in the new plumbing system. For the contractor to say that leaving it until the plumber gets around to removing it months later will not effect the system is either pure ignorance or pure bull. If we didn't need the vent stack, we wouldn't make it a required part of a plumbing system. The household plumbing should simply not be used with the vent stack plugged up. The cap should absolutely have been removed before you ever moved into the house.

When a plumbing vent stack is blocked up (by a cap, a birds nest or an ice cap), air is not available to the drain system to prevent siphon pressure on the water in the sink traps. This can easily lead to gurgling sounds in the drain pipes and siphoning out of the water in the traps, allowing sewer gasses direct access back into the house. This is not only disagreeable but unhealthy.

Since the builder has not assured that your plumbing system was healthy when you moved in, and you did bring it to his attention with no action, I would immediately hire someone to remove that cap and send the bill to the builder. It is his problem to collect from his plumber. If he doesn't want to pay it, send the bill and the whole story to the New Home Warranty program. You have a house that does not have a code approved plumbing system. That is a warranty problem, and in this case an emergency warranty problem that justifies correcting the problem and billing the builder.