We all like the ability to reduce the intensity of a light, but not all dimmers work on all lights. First a really important distinction: Fan speed controls and light dimmers often look almost identical, but are radically different devices, not to be mixed up at the risk of burning out a motor or even starting a fire. Read the boxes carefully to make sure you are not trying to slow down a fan with a light dimmer. This is one of the reasons that many provinces require electrical permits for things that seem as simple as changing a light switch.

Our viewer question was: 'Can I dim low voltage under the cupboard lights?'. 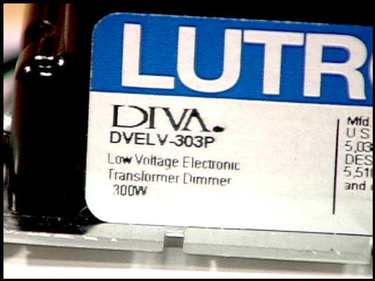 The answer is Yes -- with 'Low Voltage Electronic Transformer Dimmers' like the ones we showed from Lutron Electric. The key is that you must match the dimmer with the light. Light bulbs can have no ballast, like ordinary incandescent bulbs, or they can have electronic ballasts or they can have magnetic ballasts, the latter common in old ceiling fluorescent lights. Each has specific dimmers. We used to say that the old magnetic ballast fluorescent fixtures could not be dimmed. Now they can, but their dimmers are very expensive. It is probably better to change the ballast for modern electronic ones, which will not hum and will not allow the bulb to flicker -- and then the dimmer is more reasonably priced as well.

How about dimmers that make a bad humming sound at low light levels. This is generally avoided with larger coils inside the dimmer. Here money does make a difference as the better quieter dimmers will cost more. 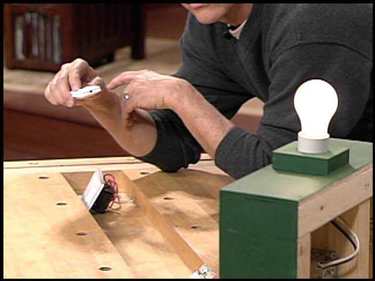 There are many forms of dimmer switches, even remote zapper like dimmers great for those places where you don't always want to get up to play with the light.

Last year a viewer was asking about putting dimmers on multi location light switches, like those top/bottom of the stairs three way light switches. For more details on 3-way and 4-way switches read this article.  At the time I said it was not easy because ordinary dimmers certainly will not work. A year later I stand corrected. Lutron now makes a set of switches and dimmers that work together for multi-location control, up to 10 separate control locations for a single light, with any of them on/off or dimmer control. For standing corrected, I stand multiply corrected on that one.  Maestro Dimmer & Switch by Lutron.  Now, for some reason it is impossible to find out exactly how to do that on Lutron's web site but their customer service did give me the exact informaiton:  "Thank you for contacting Lutron Tech Support! The two devices you would need to have dimming at both locations would be the MACL-153M and the MA-R. They are part of our Maestro product liner and give the capability of dimming from two or more locations. dated 2022"  Now you have the best guarded secret of the company.

Universal dimmers do now exist but you still need to be a bit careful how you use them.  The third photo above is a dimmer that came onto the market in 2012, from Cooper Wiring Devices, from their AL (all light) series of dimmers that work with all kinds of lights and includes a preset feature to return lights to a previously desired setting.  But some modern lights require a kick-start to turn on, like the fluorescent lights, and some must not be dimmed too low or they will kick out.

In the photo you can see two adjustment wheels on the side of the dimmer.  One wheel sets a kick-start level giving more voltage to fluorescents to start properly and then drop back to a dimming voltage, while the other wheel sets the minimum dimming setting to keep some lights from flikering when they are too dim.  This switch works with about all light bulbs: LED, CFL, INC (your old fashioned incandesent bulb), Magnetic Low Voltage, Electronic Low Voltage and Fluorescent.

Mixing bulbs in a multi-bulb fixture

There is no problem for this dimmer if you mix bulbs in a multi-bulb fixture, but it will probably be difficult to get even levels of dimming.  It states "Permanently installed fixtures only" because if you power an outlet you could do some real damage to a sound system with a dimmer.  So although it is universal, stick to light bulbs and stick to one kind in any given fixture.

Check the limitations printed on the box of all dimmer switches before installing it --and look at the switch itself for markings before changing light bulbs in a dimmer contolled fixture.