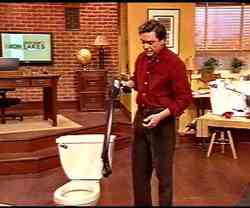 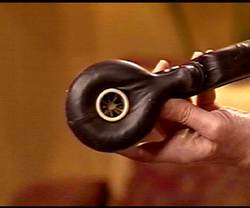 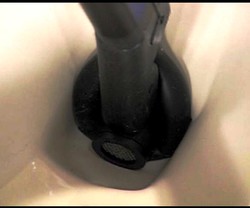 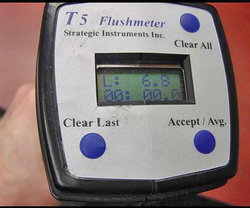 In this TV segment I talked a lot about the latest research designed to identify which low flow toilets work and which do not. For the details of that story, read through my database entry on the low flush toilet controversy and the update at the bottom of the entry.

The very reason for low flow toilets is to conserve water, so many municipalities across North America, who are providing financial subsudies for the change-out of old toilets for new ones, want to know if the new ones are really saving water. The researchers at Vertec Consulting in Mississauga, Ontario realized that it was very costly to install standard water flow meters on the water lines of toilets in people's homes to see how much water they were using under real life conditions. So they had to invent a new flow meter just for toilets.

They call the thing the T5 FlushMeter. It was quite a challange.They not only got it to work but are now manufacturing them for the industry. Their objective was to create a reliable and accurate meter that could be used instantly in any home without touching the plumbing. So they focused on measuring the water as it goes into the bowl drain, rather than the traditional effort at measuring the water coming into the tank.

They surrounded a small flow measuring turbine with an inflatable rubber gasket. You place the meter in the bottom of the toilet bowl, use a hand pump trigger in the handle of the device to pump the gasket full of air to seal it around the drain line. Then an electronic read-out will tell you exactly how much water goes through, in either liters and gallons as you like. Instant in, instant out, no plumbing, no distrubing the house and you have an accurate measurement of the real life flow through the toilet with each flush. And they did discover that many 6 litre or 1.6 gallon toilets were using far more water than the manufacturers claimed. They even discovered that some were using less, and working well.

So while some manufacturers are working hard at making reliable low flow toilets, and others are not working so hard, the water conservation industry and municipal governments are working hard at developing the tools they need to identify the toilets that are succeeding at both saving water and maintaining sanitation -- including the ability to test real installations without bothering homeowners more than a few minutes.

I think we should get this high tech gadget on the Crime Sene Investigation show. (Did they really flush the evidence down the drain?)