Rick from New Brunswick is having problems with his wood stove backdrafting and he wants to know if it will help to box in the chimney on the outside of the house. Backdrafting or difficult starting with wood burning appliances is often a problem and there are several entries in this database that have dealt with this issue over the years but let me kind of bring them all together here.

We need to understand that wood burning appliances are usually manually operated and hence operate at a wide variety of temperatures, which makes it more difficult to set them up to always operate perfectly backdraft free. In fact installing wood burning appliances is quite a science and you may want to look for a professional to help you who is WETT Certified (Wood Energy Technical Training) by the Canadian Wood Energy Institute -- a sure sign of someone who can separate country myth from building science.

DEFINATION OF A POOR CHIMNEY INSTALLATION 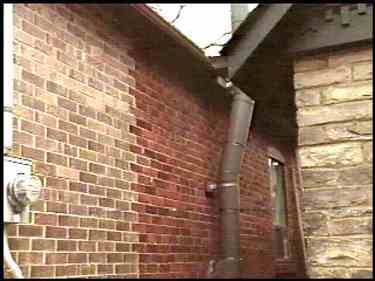 Here is a photo that shows the elements of the worst chimney installation you could have.

First, a wood burning appliance in a basement always has more problems than one installed elsewhere because the basement tends to be under negative pressure compared to the rest of the house -- which by itself acts to draw air down the chimney.

Second, chimneys, even insulated chimneys, on the outside of the house will be colder than ones that run through the heated space and hence will have cold air inside the chimney wanting to fall down. They are always more difficult to start the fire.

Third, by putting an elbow to go around the eves you have slowed down the air as well as weakened the whole structure. Chimney supports are designed for a vertical down pressure and outside chimneys, if you must put it outside, should go straight up through the overhang of the roof.

Fourth, there is no snow shield to protect the chimney from the pressures of snow and ice coming down the roof.

The only good thing about this installation is the chimney goes very high up. 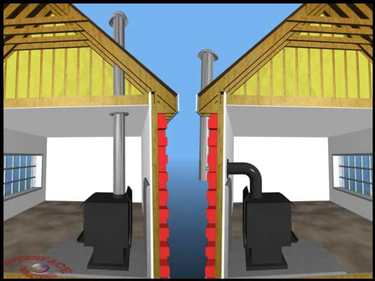 In this graphic above you see twin stoves, one with a straight warm chimney and the other with two elbows and a cold chimney. Which one do you think will work best? 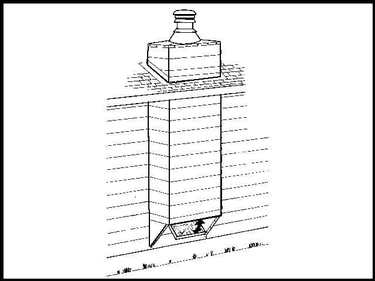 If you do want to build a chase around a chimney make sure to leave access for a clean-out on the bottom. A chase, even an insulated chase, only helps to cut out the wind chill on the chimney. If there is insulation between the chase and the heat of the house (regular wall insulation), this chimney will be freezing cold at start-up - chase or no chase. It will however work a bit better than one without a chase once the fire has warmed it up. If you want the chimney on the outside of the house but want it to function as if it was on the inside, then during construction, run the house insulation and vapour barrier along the wall, out around the chase, back along the wall but leave it out between the chimney and the house -- a section of hollow wall.

Although local building codes could vary, the specifications from the WETT training manual indicate that the distance between the floor that the appliance sits on and the top of the chimney should be at least 4.6 m (15 ft) to produce adequate draft. Meeting this principal of good drafting may require that your chimney goes much higher than the minimum required above the roof. 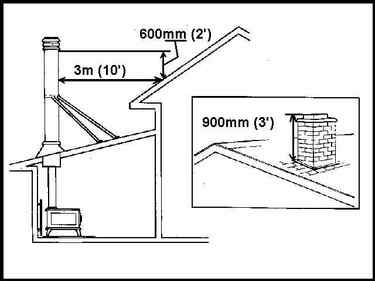 The complicated height above the roof dimensions shown here are designed to prevent the wind from going over the top of the roof and down into the chimney. Chimneys must be at least 900 mm (3 ft) higher than the highest point at which they contact the roof, AND 600 mm (2 ft) higher than any point within 3 m (10 ft) of a horizontal distance from the chimney. These are minimum chimney heights and may be increased if necessary to establish a better draft. 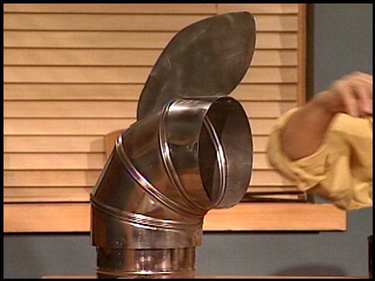 Sometimes, because of roof design or even surrounding buildings or landscape, the wind will still want to blow down your chimney. Various wind deflectors are available to aid with this problem. The most effective is a rotating elbow that acts like a wind vane to always prevent the wind from entering the chimney and even helps to create a wind driven suction. It doesn't spin around but rather simply always points the chimney opening into a down wind direction. Follow this link for details on the Wind Directed Draft Assist Chimney Cap.

If you have to open a window to get enough air to start a fire or maintain a fire without backdrafting, your house is really quite air tight and you might need to create a fresh air source for your wood burning appliance.  Some stoves and inserts actually have planned input connections for cold fresh air which greatly simplifies attaching a duct from the outdoors.   In this case, follow the manufacturer's instructions.

When this is not available you must bring in the fresh air near but not directly attached to the appliance as it was not built to receive very cold air directly.  This is often done by a duct, probably 6" in diamater,  through the wall next to the fireplace or stove -- but this fresh air (cold air) inlet can cause problem with cold drafts even when the fire is not burning.  The best way to build such a fresh air entry is to go through the wall in the basement and then turn the insulated duct uphill to come out of a regular furnace type of floor grill directly in front of the wood burning appliance or fireplace.  This way the air is flowing up-hill and not spilling cold air into the house all the time and a simple sliding damper on the grill will effectively block cold air entry when it is not wanted.  Since it is between you and the fire, the air will flow towards the chimney when there is a draw and not into the room.

The presence of this combustion air source means that the wood burning appliance will not be so affected by exhaust fans in the house or a lack of air for the chimney draft.  Smoke backdrafting should be eliminated without chilling out the house.  This also means that the chimney is not exhausting as much warm household air as before, making the whole heating operation less expensive.

If you would like to shut down the chimney temporally you will need a Lock-Top Damper.

Follow this link for an interesting animation on controlling the burn of modern wood burning appliances.