Pro: Getting Ventilation Ductwork to Work

Bathroom and kitchen fans are rated to move a certain volume of air, but do they actually move what they say they move? A study done in 1990 by CMHC says "rarely". In fact, on the average, measured volumes were 44% of rated flow for bathroom fans and 38% of rated flow for kitchen fans. The primary problem? Installation!

Most of these fans are not strong enough to open spring loaded hoods, so putting a clothes dryer hood on a bathroom fan almost assures that no air moves. But the big problem is what we call EQUIVALENT DUCT LENGTH. When air rubs on the sides of ducts or bumps into corners, it slows down. Turbulence can get so bad that nothing comes out the other end -- you've seen this with a small diameter too long cheap flex duct on a shop vac. 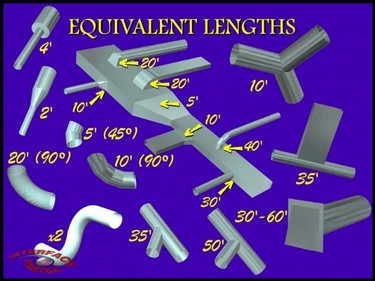 If we take a straight smooth metal duct as the standard for minimum resistance, we can compare ducting, elbows and joints to this standard. Flex ducting with internal ribs causes so much friction that the air flow sees it as twice as long as the same duct with a smooth inside surface. The diagram shows the equivalent length of some typical elbows and joints.

So if you snake clothes dryer flex ducting all over the attic for that bathroom fan, it's equivalent duct length can be hundreds of feet long, even though the real distance is only 15 feet. Rigid ducting with graduated transitions and slow elbows gets the most air flow for a given fan.

**Originally published as an article by Jon Eakes in Home Builder Magazine, the magazine of the Canadian Home Builder's Association.

For more details follow this link to Ductwork That Moves Air Best.  For year 2011 air pressure alarm device for detecting lint build-up in the clothes dryer ductwork, check out the Lint Alarm.