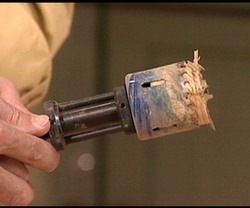 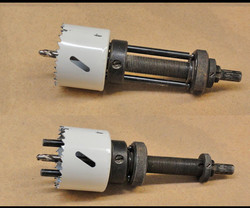 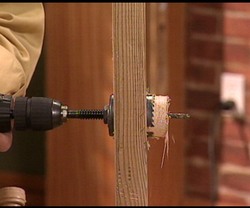 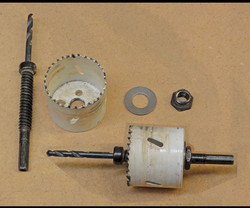 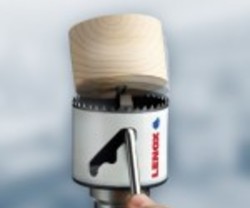 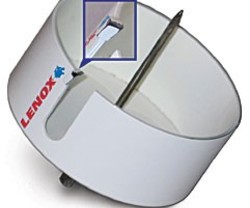 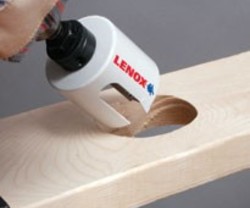 When you use a hole saw, it is often very difficult to get the plug out of the saw cup when you are done. More and more manufacturers have provided slots on the side of the hole saw to allow you to jam a screwdriver in and pry the plug out. But this is often not so easy. (By the way, the larger the set on the teeth, the easier the plug is to remove -- it's particularly hard to free a plug from a fine-cutting hole saw, like the type with carbide teeth used for cutting composite materials.)

In Europe you can buy hole saws that have springs in them to spit out the plug, but they don't work that well. I have found two other types here in North America though that do work well.

Vermont American has one that has a left handed screw built into the arbour, that shaft that joins the saw cup to the drill. Cut the hole and before withdrawing the saw, jam the saw cup into the new cut by pushing just a little sidewise, reverse the drill, and the plug spits out the other side. It works really very well, but the mechanism takes up a bit of space in the bottom of the saw cup, forcing you to use deeper saws to get some jobs done.

The Lenox Saw company has a hole saw with the ejector mechanism on the arbour behind the cup so it doesn't take up any space inside the cup. With an ordinary hole saw there are usually two pins that lock the saw cup to the arbour. With this special arbour, the two pins are longer -- they do their normal job while cutting, and then you can shove them forward to push out the plug when the job is done. Since the pins push evenly on both sides of the plug, and from directly behind, they do a beautiful job.  Here the problem is that you have to set two stops on the arbour, a bit time consuming if you want to change hole saw sizes.

Neither of these quick and easy ejection mechanisms could be called quick change for hole saws but the Vermont American is quicker and easier to use as I don't have to worry about perhaps wearing gloves for the ejection action.

In 2012 Lenox came out with the incredibly simple and effect idea of putting a "stair step" into their ejector slot and called it the "Speed Slot" hole saw.  This goes back to using the screwdriver to wedge out the plug -- but with three leverage points.  No special mounting arbour but quick and easy ejection.

In 2006 Lenox came out with a very effective and unique 1 tooth hole saw.  You can read my 2006 builder article on this saw here. This wonderful saw seemed to have dissapeared and then Lenox explained to me that they accepted the critisim that 1 tooth does not make a saw, so they no longer call it a "Hole Saw" but a "One Tooth Rough Wood Drill Bit".  It took a while but I finally found it on their web site: here.   It is easy to find for sale with an on-line search "one tooth hole saw"; although you may have to special order the largest size from a hardware store that sells Lenox products.  The prices have come down to something rather normal from when I wrote that Home Builder article.

The One Tooth Rough Wood Drill Bit comes in the full range of sizes right up to 6-1/4 inches (which because of its rough cut comes out to 6-5/16")  making it the most efficient ventilation duct hole saw on the market.  With the wide tooth it doesn't bind and the plug comes out all by itself!  This is the only large size hole saw that a normal size worker can actually control because you are only fighting against the torque of one tooth, not a whole rim of teeth and there is almost no binding.  A surprising side effect to having only 1 tooth is that you can very easily control it for angled cuts.