Radon -- The Details in English Videos

The Science of Passive Stack Draw 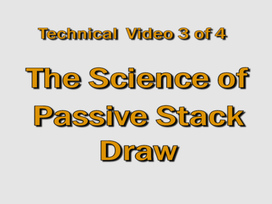 There is a lot of buzz on the web that Passive Stacks do not work for controlling radon.  The reality is that they should not be dismissed out of hand as they do provide a permanent no maintenance solution to radon in many houses.  You do need to understand that there are four basic requirements for passive stacks to work.

Second, there is a passive rise of air in the house itself.  If the cracks, holes and other openings into the sub-slab are large, the house itself will pull more gas out of the soil than will that four inch passive radon stack – in fact it could reverse the flow in the pipe.  So a well sealed gas membrane between the sub-slab area and the household air is critically important for the good functioning of a passive stack; cut out the competition.

Third, the draw from a radon stack in a cold climate is reliable, but not strong.  The stack must rise as straight as possible and as high as possible to create the draw.  Details of piping, like horizontal runs, can stop the draw under the slab.  Watch this video to understand the critical working details.

A properly constructed passive stack has proven to be able to reduce the radon levels as much as 50%.  So the fourth requirement is, if the radon levels in a house are much more than twice the action levels, the passive stack may work, but not effectively enough.  However, it is always worth the try, because if testing after occupation shows the need for more radon removal, a fan can always be easily added to a passive stack.  A well-built passive radon system can be very effective with a smaller fan than simply drilling a hole in the slab and installing a fan.

In houses with no air-conditioning, open windows in the non-heating season reduces the radon levels in the house.  If you seal the house up and air-condition for only two months out of the year, you could add a fan to the passive stack and only turn it on when the air conditioning is running or the windows are closed.  All of that can easily be automated.

This is the third of four technical radon videos.

“See and make comments on bottom of page”

Thank you. This was extremely informative. As a radon measurement professional in Alberta since 2015 I enjoy learning about radon in any capacity. This was well done and simple to understand. Thanks again!