How do I keep a shallow Sump drain from freezing outdoors? 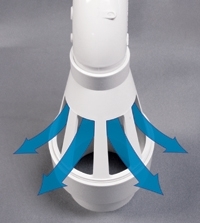 Michael writes from St. Lazare, Quebec : We recently found a nasty surprise with our new house. The land has a high water table and as a result we have sump pump in the basement. The plumbing for this pump was hidden in the walls and ceiling of the basement. When our inspector inspected the home, he tested the pump and told us that the drain would be exiting the home somewhere, most likely at the rear of the house. 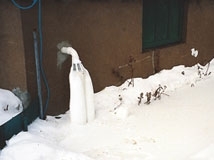 Come to find out that we have major septic tank and weeping bed problems because the sump pump is plumbed into the septic tank. I have recently re-routed the sump pump to it's own drain outside the house and am burring a 1 1/2 inch abs pipe underground to carry the water from the sump pump in the basement to the culvert that runs behind our house. 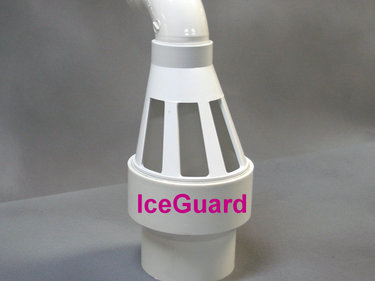 I would like to try and prevent that pipe from freezing in the winter. To help with this I have made sure that the pipe is on an angle, approx 2 feet over 100 feet of length. I have also put a "T" where it comes out of the house to allow air into the pipe so that is can properly drain. I have heard that putting styro-foam insulation over the pipe will stop the frost from getting to it in the winter. Do you have an comments on this? What type of insulation is the best? The pipe can only go about 8" in the shallowest area, to 1.5' at the deepest spot underground, so it's not below the frost line.

The reason we bury pipes 4 to 5 feet in the ground is to get them deep enough so that they will not freeze, or more technically, get enough dirt acting as insulation over them to protect them. Actually R-20 over the top of a pipe, and 2 feet on each side, will provide both a shield against the cold above, and a trap from geothermal heat from below. that means 4 inches of extruded polystyrene (blue Dow or pink Celfort) will do the job even if they are only just below the topsoil.  If your soil is very dry and sandy, you could get away with just one foot on each side because the heat will not sneak around the insulation so well. Shallow frost protection can work.

If it is simply the sump pump discharge that is freezing, no matter how close or far it is from the house, I have located one fantastic discharge terminator that avoids this problem called IceGuard. If your line freezes, the warm water from the house discharges onto the ground before the frozen section, which is better than simply backing up in the basement. It is distributed by a company that specializes in basement problems:www.BasementSystems.com but is not sold alone, they insist on installing it -- which is not such a bad idea to have a sump pump specialist look at your whole system to see if this will really work. 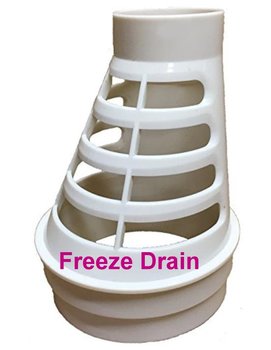 Some variations exist.  The Freeze Drain is quite similar but it appears that the vertical slots of the IceGuard flow longer without clogging.  The IceCop is really designed as a over the top water relief and not a flow through device.  It really dosen't look like it will stay ice free for long. And then for the real Do-It-Yourselfer, you can simply purchase a 2" to 4" PVC Pipe Fitting, Eccentric Coupling, Schedule 40 socket and cut your own slots.  The only problem with making a DIY version is that the original Ice Guard from Basement Systems has a special detail in the inside shape of the reversed funnel -- the 2" pipe actually extends down into the open part of the funnel.  This prevents water from flowing along the open part of the wall and icing from the top down.  The water shoots straight through without wetting the sides right up until there is an ice block below, and then it flows out through the slots from the bottom upwards.  One other details is that the large end fits on either a 3 or a 4 inch underground pipe. 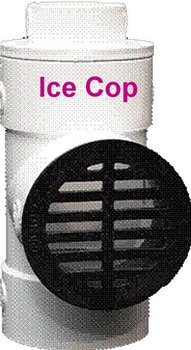 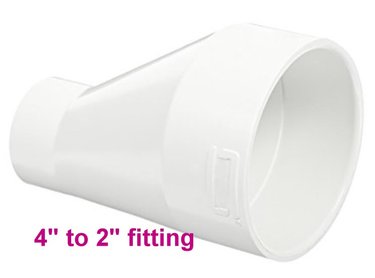