Low flow toilets: do they work? do they not work? This is an ongoing very interesting debate. This history of the evolution was first written in 2001.  For the latest updates on this story and current data on toilets that do work, click here.

The average Canadian household uses between 7 hundred and 11 hundred litres of water every day, and about 40% of that is flushed down the toilet. Our need for water conservation, both reducing the use of water and reducing the cost of treating sewage, demands that we find ways to reduce the quantity of water that we send down the toilet.

Dual flush is one of the brightest ideas in this field, where there are two options on the toilet, a full flush and a half flush depending upon whether we need to get rid of solid matter or not. This technology has been used around the world for years, although it is only beginning to be introduced into North America -- the land of too abundant water.

Even before adopting the intelligent "dual flush" concept, North American municipalities and even states and provinces have begun to legislate "low flush", where the total quantity of water used by the toilet is radically reduced, from over 20 litres to 13 litres and now most low flush requirements are for 6 litres per flush. Dual low flush can give you a 6 litre / 3 litre choice. Great for water conservation.

But the first North American efforts at low flush were a terrible failure, the solids rarely got out of the toilet without flushing two or three times. So the manufacturers went to work to perfect the smoothness of the inner walls of the toilet trap, and employed various techniques to get the siphon action to work more quickly. Finally the higher end toilets succeeded in getting the solids out of the toilet almost all the time, but the cheaper toilets still have problems. Despite the slow technological progress, municipal, provincial and state jurisdictions ran ahead passing legislation requiring the installation of toilets that many said weren't reliably getting rid of sanitary waste.

So the debate was started. The governments who pay for water and water treatment insisted that we move forward. Ecologists applauded. Homebuilders struggled with consumer complaints. Plumbers who clean out drain lines reported record earnings. Consumers who talked to me at home shows complained continuously. (Of course I never heard from those who had no problems.)

The Canada Mortgage and Housing Corporation is studying the dual flush systems, reporting good results. As for drain lines, they feel there is no real problem. On the other side, the Canadian Water & Wastewater Association did a study of low flush toilets that was reported in the September issue of Plumbing & HVAC, indicating that two-thirds of the six-litre toilets failed tests as defined by the CSA (Canadian Standard's Association) that they ran themselves. The CSA indicated that because of this study they would take a second look at the whole issue. And the Australians are laughing in their beer.

Why are the Australians laughing? First understand that Australia is mostly desert -- not much water. When they decided to look at reducing water use in toilets they set up a major research project which had one component that we seem to have totally skipped in North America. The toilet and all the waste lines attached to it form a single system. If the toilet works but the drain doesn't, then the system doesn't work. In North American we seem to have taken the position that the plumbing manufacturers are making toilets that get the waste out of the bottom of the toilet, and after that it is not their problem. It is a different plumber who cleans out clogged drains. 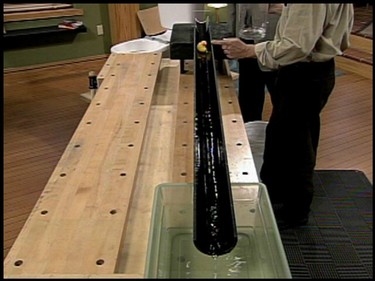 It took the Australians about two weeks of research to realise that low flush and siphon technology don't work together. The problem with a six litre siphon system (which represents almost all our present toilets from North American manufacturers) is that almost all the water is used to suck the solid waste out of the toilet. You can see this as it spins and flows and at the last minute, if you are lucky, it sucks the solid waste down the drain, but there is little left to flow it down to the street. As you can see in the first photo, we demonstrated adding waste to the horizontal line after most of the water has passed. The duck is left sitting half way down the line waiting to dry. Sure, this is a TV studio demo with a rubber duck, but our Australian guest confirmed that this did in fact correspond to what they filmed in real drain lines. 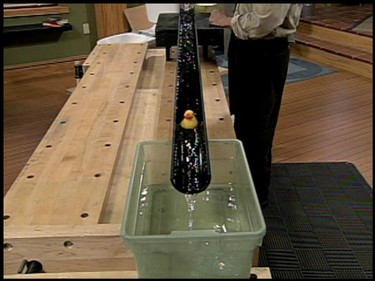 If someone uses the toilet again before this stuff dries up and sticks, then the water leading the second flush will move this earlier flush on through the system. The second guy's flush takes care of the first guy's stuff ! When I heard this, many stories that I have heard began to make sense. Most of the clogged lines seem to be in little used toilets, like the one in the guest bedroom, or the blockage after you get back from vacation. Here there was no "second" flush to take care of the "first" stuff. 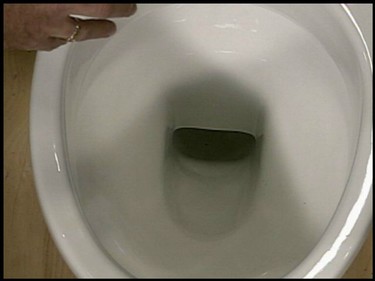 The Australians immediately began to study a European technology they call "Wash Down". The toilet trap is very large for minimum resistance, so large that you could not even dream of creating a siphon. No water is sent ahead of the waste, but rather all the water is dumped on top of the waste. Note how deep and steep the sides of the toilet are in the Caroma toilet in the photo. This means that the solid waste is surfing the wave of all six litres, right down to the city sewage line. The horizontal line is cleared every time, nothing is left to dry and clog. 85% of all toilets in Australia work on this principle. In addition, the Caroma toilet has the dual flush mechanism, six litres for number 2, three litres for number 1. Since people do number 1 more often than number 2, the average flush is 4 litres. This is water conservation, without clogged sewage lines.

What are the downsides of each system. The wash down system has less water in the bottom, hence a brush is usually kept near the toilet to eliminate skid marks -- something found common and acceptable in Europe and Asia, and generally unacceptable in North America. The siphon system, especially with low flush, has far more sewage blockages and hence a plunger is usually kept near the toilet and accepted as normal in North America and totally unacceptable in Europe and Asia. Oh how lifestyle and culture can dominate technology. However, both of these inconveniences deal only with the toilet bowl itself. A six litre siphon flush does not take the waste through the horizontal drain line. A six litre wash down flush does.

Even if our North American low flush toilets are working 80% of the time, to my way of thinking, 20% clogging is unacceptable from a health point of view, especially when we discover that a more sanitary technology is available. In addition, brushing the bowl occasionally is a lot cheaper than calling in a plumber to snake out the horizontal line. For some reason our North American industry is insisting on trying to get the siphon technology to work way beyond it's technological capacity when we consider both the toilet and the horizontal drain lines as a single system. Siphon technology works most of the time at 6 litres (probably because other water flows in the house are helping out), wash down technology works all the time at 6 litres. I think that the Australians are going to steal the new toilet market until North American toilet manufacturers admit that they are working hard in the wrong direction.