What temperature should a house be when you are gone for the winter? 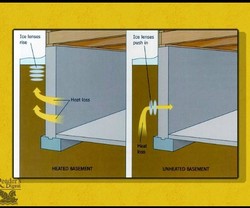 Jim from London, Ontario is wondering what temperature he should leave his thermostat while he migrates south for the winter. The short answer is 55 degrees F, or about 12 degrees C.

That should keep the pipes from freezing, keep the humidity under control, keep the furniture from going through too radical of changes, keep the paint dry -- generally keep the house in good condition.

If you are worried about a power outage that could freeze plumbing pipes, you should shut off the water at the main valve, drain down all the water lines and fill all the sink traps, bathtub and shower traps as well as toilet bowels with RV anti-freeze. This is a special easy to find anti-freeze that is designed to not bother septic systems, either private systems or the municipal system. It will keep the traps working while there is no water in the lines, keeping foul odours out of the house.

That full drain down is what we often do for only occasionally visited cottages, mostly because they can have extended power out problems and it is the "full protection" action to take for a city dwelling as well.  However most city dwellings don't have extended power out problems, so it is far more common to simplly turn off the main water valve.  That way if there is a frozen pipe that bursts, there is very little water damage -- not two weeks of water flow.  When you get home and turn on that main valve, listen carefully for water flow before anyone turns on a faucet.  Some toilet tanks may have leaked dry so don't panic until there has been time for any toilets to fill up.  If the sound of water flowing in the pipes stops, you have no problems.  If you still hear water, check throughly for a signs of water from a broken pipe.

One really interesting detail is the question about how much heat does it take for frost to not crack the foundation? The technical answer is just barely above freezing, 55 degrees is a fair degree of safety over that minimum.

Why just above freezing? Because frost causes its problems generally by a phenomena called Ice Lenses, disks of ice that form in wet clay soils. These lenses will form perpendicular to the direction of heat loss. So if the soil outside the foundation is below freezing but the soil is warmer than the basement because the geothermal heat is above the freezing air temperature, these ice lenses will form parallel to the wall. Since ice expands as it forms, these lenses will push against the wall, explaining that horizontal crack at the cottage. If the basement is slightly warmer than the soil outdoors, no matter how much insulation is on the wall, the heat will be moving from the basement out into the soil and up. Now the ice lenses will be forming in a horizontal plane and the force of expansion is harmlessly up, leaving the foundation alone and crack free. Follow this link for more information on Ice Lenses.