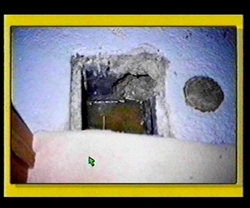 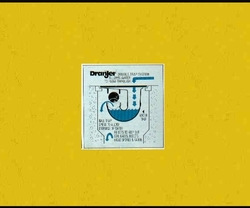 Joan from Windsor, Ontario has one of those large square floor drains with a heavy metal grate over it that are so common Ontario eastward. There are under slab pipes that come in and out of this collection box. The concept was designed as a drainage system for an empty storage space called an old basement. But Joan, like so many people, have now built a bedroom right next to this slimy hole. The question is how to leave it functional but stop the smells.

There are special "dry" drain traps called "Dranjer" that have been developed to prevent radon from coming into homes by way of basement floor traps and I thought we could find a way to use this same gadget here. I sent one of these things out to Joan and haven't gotten word back yet, but I did install one in Montreal and it is working fine.

We glued (PL Premium) a vinyl frame around the concrete box a bit below the grate and then glued in a piece of Plexiglass (so we could see what was going on). Then we cut a hole in the Plexiglass to fit in the Dranjer trap. They make a wide variety of these traps and even have some very interesting new ones for new construction that work as both a backflow valve and a dry trap.

As you can see in the photo, it looks like a regular plumbing trap. Except that it has a floating ball that drops and seals the passageway when everything is dry. When there is water present, it floats and opens the drain. The great thing is that while dry, no gasses come out of the drain. It appears to be working wonderfully in this new application.