Noises -- sounds that tell you what is wrong with your house 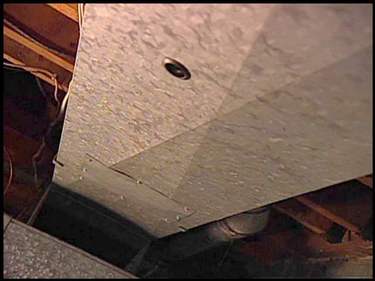 Gina in Saskatoon is complaining about drum cymbal-like crashes that happen every time her furnace goes on. This is common when you have smooth flat ductwork. The heat and pressure of the air can cause the large flat surface of sheet metal to flex either in or out, causing the cymbal crashing sound. The best solution is as seen in the photo. An 'X' is bent into the large surface area, forcing the ducting in one direction so that with temperature and pressure changes, it will not buckle into the opposite direction. That X is one sign of good ductwork.

If the furnace makes a rumble just when it starts up, it is probably a loose fan belt that is vibrating until it gets up to speed. If the noise comes after it heats up, then it is the ductwork.

Fan rattling --> Dirt on the blades

A cheap bathroom fan can make terrible rattling sounds, and often it can be fixed simply by cleaning the blades, or tightening screws, allowing it to vibrate a little but not having two pieces of the mounting vibrating against each other. Of course the more money you put into the fan, the quieter you can expect it to be -- and vice-versa.

Althoug the continuous sound of water running when everything is turned off could indicate a leak somewhere in the piping -- usually it is in fact just the toilet flapper that has gotten old. This is especially prevelant if you use chlorine puck cleaners in the tank as these cause the flapper to warp and let a very tiny bit of water to flow continuously into the toilet bowl. You can test for this leak very easily with food colouring. So yes you have a leak in the plumbing, but it doesn't show up because it flows down the toilet drain. Replace the flapper and clean off the rim where it seals to the pipe leading to the toilet.

Another possibility for continuously running plumbing is also found inside the toilet tank -- a constant overflow.  If the water height float is not properly adjusted to stop the water below the top of the overflow pipe, then the toilet simply runs all the time.  Floats on a long horizontal bar are adjusted by simple bending the bar, making the float lower and hence turn off sooner.  Other models have a screw on the valve itself -- simply turn the screw so the water stops sooner.

A third possibility is after working on old plumbing pipes, like replacing the street valve or the main house valve, small particles are often dislodged and flow into the house.  These particles can get caught in the shu-off valve of toilets -- keeping them slightly open.  This will give a running water sound to the entire piping system, without any obvious water flow.

You can identify if water is continuously flowing through the toilet tank with food colouring -- follow this link to see how.

Any of these flow problems can ctreate mineral stains inside the toilet bowl even if the toilet is rarely used. 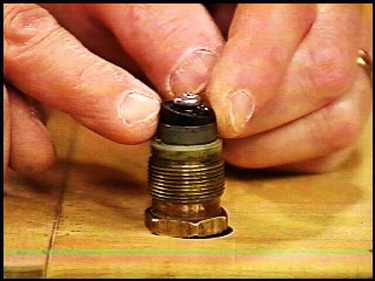 When your hot water faucet causes a vibration that you are sure is going to bring the house down, it is simply a hardened and loose washer as in the second photo. With a certain passage of water, the loose washer sets up a vibration, and when that vibration hits a harmonic with the plumbing pipes, you get a sound that could hold its own, with an electronic rock band. The solution is simply a new washer.  Sometimes this is caused by a defective toilet tank washer and simply turning on a faucet changes the pressure on that washer and causes vibrations and strangely enough the solution is in the toilet tank, not in the faucet.

If you have a sudden bang when you shut off the water, or most commonly when a clothes washer or dish washer turns off the water with an automatic valve, you probably have Water Hammer. There are plumbing tricks and gagets that will solve this. 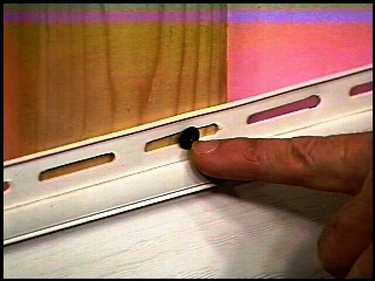 Then there is the machine gun, or pop-corn, sound around 2pm or 2am. That comes from vinyl or aluminium siding that is nailed too tightly to the wall. These sidings expand and contract a great deal, changing their length measurably from the heat of the afternoon sun to the cool of the night. That is why they are installed with nails or screws put in the middle of slots, and not fastened too tightly. The siding literally has to slide back and fourth every day, and if the fasteners are too tight, it forces and forces to expand until it 'pops' to a new position and 'pops' back at the following night. Of course several hundred of these mounting positions move almost at the same time -- giving you the impression that someone is making popcorn. About the only solution is to re-hang the siding.

If you have a squeaking noise rather than a popcorn noise, it is because someone attached siding directly over foam insulation with no building paper between the two. That can get worse than fingernails on a chalk board.

A sudden bang in the middle of the night which sounds like someone just hammered something in the attic is actually the same kind of problem, but very difficult to isolate. It is one of the joists shrinking and pulling away from its nails, pulling and pulling until it manages to suddenly move with a bang. It is not really dangerous because in the afternoon it always bangs back into place, you just don't notice it in the daytime. The only solution is to find out which joist is not properly nailed and nail it more. About the only tactic I have heard of to figure out where the problem is located is to put a tape recorder in the attic and record the noise, moving the microphone around night after night hunting for the loudest sound. That one has no easy solution.