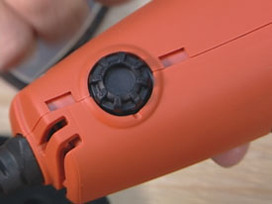 The power of your tool can sometimes determine if you can successfully tackle a tough job or not.  Failure to understand the power required for each job could cause you to burn out your oscillating tool.  Learning when to use the speed controls can not only save you costly sandpaper but could get you past certain control problems.

Re JT's comment: These vid's don't sound like infomercials to me. They sound like a guy who knows which tool is best, becomes an expert at it, and teaches what he knows. Thanks for the great info Jon....your attention to completeness & detail is awesome, I love it.

I have no doubt that the Fein tools are the best. However, given their extremely high price tags they are not in reach of many of the audience of this website. And there are a multitude of OTHER brands on the market. It would be nice to see at least some of those covered and or mentioned in this video series. Not everyone needs or can even afford to buy the Mercedes of tools, that the Fein represents. Some of use ONLY need a tool for occasional use and the Fein is major overkill for weekend handymen and occasional users of this specialized tool.Show the King branded tool (which I have). It works great. Yeah it has fewer attachements and might prove to be less durable, but for the 10-20 times I used it thus far it has worked flawlessly for doing most of the stuff you have shown in this series. Dremel, Rockwell, Mastercraft, Rigid among others all make tools in this sector. At least mention them by name as alternatives Better yet use them to show what THEY are good at.This video series is way too much like an infomercial for Fein (I hope you are getting great royalties from Fein, Jon) than anything else. It is a disappointment given that I always found Jon to be a great source of relatively unbiased information, not just another infomercial schill. I think this sort of thing detracts from your credibility Jon, and mars an otherwise decent site.