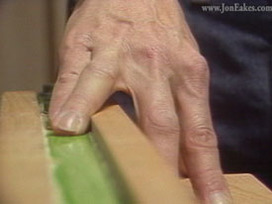 Although in a woodworking shop it is a Band Saw that is considered the best ripping tool, because of no drag on the blade, the Table Saw is the tool that is most often used to rip wood -- that is cut it along the direction of the grain.

You will find many detailed videos on different aspects of this task in the video listing on the lift, especially on the safety aspects of controlling the wood for a clean and safe cut. The video below gives you a quick introduction.

Ripping generally gives a rather rough cut but there is a video set in the Learning Curve that deals with Specialty Circular Saw Blades and there is one video in that set on a rip blade that gives a finished glue line right off of the saw: the "Glue Line Rip Blade", which was invented after this set of videos were made.