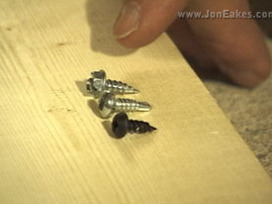 You need special screws when you build a steel stud wall -- not just any sheet metal screw as the head thickness can cause problems with the drywall.

Hi, there. I live in a converted warehouse with metal studs and drywall that may be thicker than the usual residential thickness – but I'm not really sure how thick it is – and I want to hang a track for a tool rack that may bear a lot of weight. Can you tell me as exactly as possible what kind of screws you'd recommend?
(I'm a real beginner, just now figuring out how to use a drill, so please assume I know nothing!)
Many thanks for your kind advice!

Hi Carolyn,
I think you missed the last video in the series on "Working with Steel Studs", "Hanging Things on Metal Studs"
https://joneakes.com/learning-curve/30-drywall-hanging-things-on-metal-studs
That will show you clearly what you need -- and the weight load is printed on the fastener packages.
Jon

I'm working with metal studs for the first time and I'm finding that the pan-head framing screws prevent the drywall from laying flat on the studs. They're even causing the drywall to crack at corners. I'm using identical screws to the one that you showed was correct in this video. Their packaging even markets them as "pan head framing screws". Is there something I'm doing wrong? Any advice?

Hello David,
Yes, although better than other sheet metal screws, the steel stud screws do still make a bit of a bump. Note that in most positions, you have a choice of putting the screw through to the part of the stud that is in direct contact with the outer piece of metal -- or of moving to the center of the "stud", in the embossed section, where the metal is slightly away from the outside member. That allows for drawing the screw head further below the outside plane where the drywall stops. It does not eliminate the bump, but if well placed and cinched up tight (without stripping the thread) it tends to sink in about half the total head thickness. That is usually good enough. Screws too close to the absolute edge of the drywall are the ones that still cause a problem.