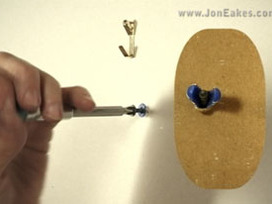 Here you will see hooks, anchors and other ways to hang things on drywall when you don't have a stud where you want one.  In fact our camera shows you what happens inside the wall at the same time as we install them on the outside.

What kind of Stud Finder would you recommend?

Hello Judy,
That's a tough question. There are so many stud-finders on the market ranging from $15 to $200, and none of them work all the time!

Probably the very old fashioned little magnet on a pivot was the most accurate as it would swing only if you were right over the head of a drywall screw. Most of the others look for differences in density in the wall, but in a very old house, the studs are so dry that often they don't show up, or often not accurately.

Many modern stud-finders can be switched to find wood, metal or electric wires. Good to know before driving a screw. I have 12 different ones on my shelf, and there have been times when none of them agreed with each other.

One tip is that most studs are 16" or 24" on centre. Mark out several and then measure. Erase the marks that don't fit that sequence.
--Jon